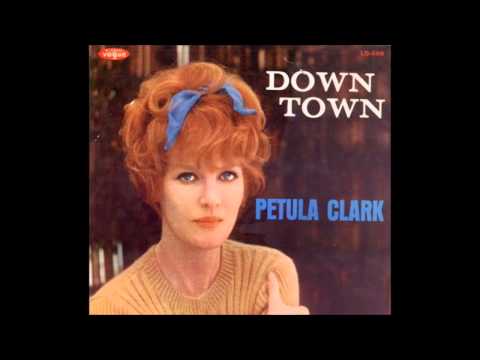 “Downtown” is an iconic pop tune, first recorded by Petula Clark in 1964. Songwriter, Tony Hatch, conceived the song during his first visit to New York in the Fall of 1964. From Wikipedia: Hatch recalled “"I was staying at a hotel on Central Park and I wandered down to Broadway and to Times Square and, naively, I thought I was downtown. . . . I loved the whole atmosphere there and the [music] came to me very, very quickly". He was standing on the corner of 48th Street waiting for the traffic lights to change, looking towards Times Square when "the melody first came to me, just as the neon signs went on."

Following his trip to New York, Hatch visited Paris and pitched a few songs from the New York publishers to Petula Clark. Not inspired by anything presented, Petula asked Hatch if he had anything he had been working on of his own. Although the song was nowhere near finished, he “reluctantly played her the tune of his New York inspiration and slipped in ‘Downtown’ in the appropriate places. Just like the millions of Americans who quickly made “Downtown” a number one hit, Petula recognized a great hook when she heard one. She reportedly told Hatch: “That’s the one I want to record. Get that finished, get a good lyric in it, get a great arrangement and I think we’ll at least have a song we’re proud to record, even if it isn’t a hit.”

“Downtown” WAS a hit, topping the charts at number one in the states and peaking at number two on the British charts. It has certainly stood the test of time, and has been covered by multiple artists over the years.

Jimmy Mac was the only choice possible to record the vocal for the male range of “Downtown.” When you spend hours in the studio with someone, working and focusing on music during those hours, you learn things about a person’s own musical history. More than once, Jimmy had asked “What about ‘Downtown?’ Would that work?” He would go on to say how that song would take him back to his childhood, playing in the garage, etc. So I knew he would be excited when I told him, “let’s make a rough, and see if we can get ‘Downtown’ to work.” Once we finalized the arrangement and the rough, the next step is to transpose the roughs into the two keys most suitable for the male and female ranges. He locked in the male range, and then sang along to see how it felt, claiming “I think it’s good. It works for me.” I told him, “That’s good! You’re singing it!”

We often hear Jimmy’s voice in our background vocals, but this is the first time he’s sung the lead since our duet of “Baby, It’s Cold Outside” back in October of 2016. With a little coaching on timing of the calls from my favorite caller-on-sabbatical, Jimmy did a great job with this vocal and we all had fun recording it! We love it and hope you do, too!

The female range was recorded by Shauna Kaaria, with backgrounds for both courtesy of both Shauna and Jimmy Mac.