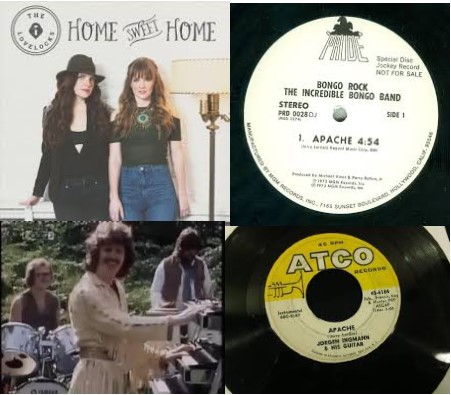 That's right! We are releasing two new patter tracks this month. First up, "Apache." “Apache” is an instrumental piece composed by Jerry Lordan. There have been many versions of the song over the years. The 1960 version by The Shadows topped the UK Singles chart for five weeks. Danish guitarist, Jorgen Ingmann, covered the song in 1961 and went to number 2 in the US and Canada. A 1973 version by the Incredible Bongo Band was not widely known upon release, but has later been deemed “hip-hop’s” national anthem (for its long percussion break).

Our version is a combination of all three, with focus on the Ingmann guitars, and then moving into the exciting rhythm track and horn section of the Bongo Band release. Vic and Jimmy put their heads together for this arrangement in late January, and Jimmy and I finished the track. Personally, I love this. Hope you do, too.

“Home Sweet Hoedown” is a project that I’ve been meaning to do for nearly four years now. I love the rhythm track on the “Home Sweet Home” singing call, and have been meaning to get back to it and create an extended patter with the singing call’s rhythm track as the baseline. We had time this past Saturday and, as usual, Jimmy just knocked it out of the park. He created new melodies, added more rhythm guitars, electric guitars, and two different mandolin voices, and created a really fun piece of hoedown music.

CHIC4065(4000 series identifies patters and hoedowns) is a seriously cool patter with two really cool grooves that work great together.