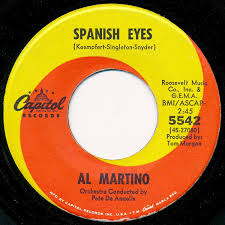 “Spanish Eyes” is a well-known song that probably doesn’t need much introduction. Most of you, like me, first heard it with the 1966 hit by Al Martino. In my childhood home, the “Spanish Eyes” album was one of the very few records my parents owned, and I probably should finally confess to my father that my siblings and I were responsible for wearing it out. Specifically, me, my younger sister, and the girl who lived across the street. We choreographed a beautiful hula dance to the song with the intent of putting on a show for our parents (even charging them admission), practiced hundreds of times (poor record), and I don’t think we ever had our little show. Probably a little too ambitious for seven-year-olds.

Needless to say, I have loved this song for MANY years. I thought the “danced-up” version from Engelbert Humperdinck in 1998 was seriously cool when Vic started using it for patter (a few moons ago), but the vocal track and the change-up of the dance rhythm throughout kept it from being a go-to piece of music for calling. A few years back, when the Shakedown band was playing together, we charted the song and I had a blast playing the fun bass rhythm. It was one of my favorite patter pieces we played, and I’ve thought about taking it to the studio quite a few times, but just never pulled the trigger.

Last week, Vic was headed off to the studio to do some work with Jimmy for New Beat. I jokingly said, “We don’t have a release for July yet…if you have time, knock out a patter with ‘Spanish Eyes.’” Later that night (MUCH later), I got a text from Vic that he would be home late. They were working on “Spanish Eyes.” I went to bed, Vic got home around 3am, and I woke up to find the completed track sitting in the DropBox.

If THIS is what happens when Vic and Jimmy are left in the studio unsupervised…I should leave them there more often. Every time I listen, I hear something new. I love it! Hope you do, too.

CHIC4057(4000 series identifies patters and hoedowns) is, quite simply, a smooth and beautiful piece of patter music with a laid-back Latin groove that dances like a dream.