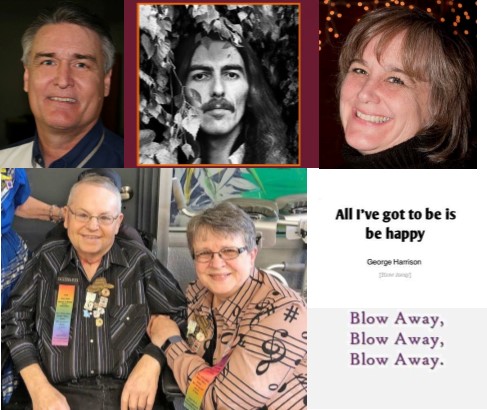 Released in February of 1979 (the year I graduated from High School), “Blow Away” is one of George Harrison’s most popular songs from his solo career. One survey puts it in second place, falling behind “My Sweet Lord” in the number one spot. If the song title doesn’t ring a bell, just give it a listen. Once the chorus hits, you’ll know it and be singing along.

In his autobiography, George said “the song arose from feelings of frustration and inadequacy, resulting from a leaking roof at his Friar Park home.” He said he realized that by “surrendering to the problem, he was merely exacerbating it.” It was a reminder that he needed to be more optimistic. He was initially a little self-conscious about the simple lyric, thinking it was “too obvious.”

“Obvious,” perhaps. But extremely profound. The simple chorus reminds us that “all we gotta do is…be happy.” Challenges come everyone’s way, and we have the gift to choose how we handle them.

I have been so inspired by the way that Connie and Eldon Graham (fellow caller and her husband) have dealt with Eldon’s battle with the Guillian-Barre disease, that I am dedicating this song to them. Life has certainly “rained on their parade” for the past year, and if you’ve been following Connie’s posts you know that they have met every challenge with true love, and the kind of positive attitude that can't help but make it “Blow Away.” I look forward to the day I can dance in a square with the two of them, and I know that day will come. Soon!

Considering the fact that George Harrison is his favorite Beatle, Staff Caller, Vic Kaaria was a no-brainer choice to record the vocal. In addition to recording a great vocal, Vic’s familiarity with the song was a huge help during the production of the music with Jimmy Mac. As always, Jimmy Mac nailed the music. Tons of fun watching him work the slide on his guitar.

Staff Caller, Patty Greene, brought the song to my attention and provided a great vocal for the female vocal range. She has had her hands full the past few weeks, and she still managed to record an awesome vocal and get it to us in plenty of time for the release. Patty rocks!!!

CHIC 1053 in the male vocal range features the awesome vocal by Vic Kaaria.