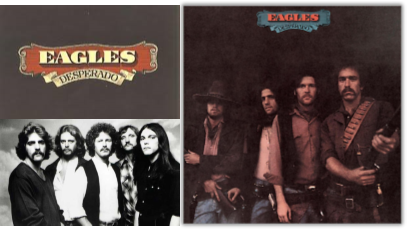 August 22nd marks three years in business for Chic Recordings, so we've decided to celebrate with an Anniversary release! “Desperado” was written by Don Henley and Glenn Frey and first appeared on their 1973 album, “Desperado.” For Chic Recordings, “Desperado” is the song that almost wasn’t. I get many song suggestions and have a constant ear on various music sources. I had considered “Desperado” early on, but it was a passing notion. Some months ago, I saw a post on Facebook that Tony and Kim Oxendine were at an Eagles concert, and Kim had claimed that Tony sings “Desperado” better than the Eagles. My producer mind said, “Hmmmm…I thought about that song before. How cool if we cut it and let Tony sing it…he’s better than the Eagles!”

I pulled up the original song and created a singing call arrangement in my head that I thought would work. We went into the studio and made a rough cut and sent it to Tony. He and I both played with it some, and I discovered that I just could not call to it the way it was cut. He confirmed he was having some difficulty, as well. Back into the studio I went, taking my favorite caller (major Eagles fan) with me. He, Jimmy, and I pulled out all the rhythm tricks we knew to try to make it “dance” and “callable,” without success. Heartbroken, I spoke to Tony at Nationals and told him it just wasn’t going to work.

Vic tells me I’m stubborn, and maybe that is true, because I just couldn’t let it go. As I was driving to the next studio session alone, I had an arrangement epiphany. I arrived in Ventura and told Jimmy, “pull up Desperado again.” We moved things around to the new arrangement, and made some modifications to the rhythm track. It was better. I sent it to Tony, and he agreed. Next studio session, with my favorite caller (and silent partner) in tow, we added some things to the rhythm track, and went forward with some live instrumentation. The magic began to happen, and I knew it was going to work. At the end of the session, I sent a new track to Tony and got the following response, “now this one I REALLY like!!!!!!!!!!!!!” (Exact amount of exclamation points may not be completely accurate.) While Tony played with his track, I took mine to my guinea pigs (aka weekly class) for a test drive. My singing needed some work, but the track was dancing, and the dancers were responding. We had a winner. I knew immediately that THIS was to be the release that celebrates Chic Recordings THIRD anniversary. The singing call that almost wasn’t, “Desperado.”

As everyone knows, I have an amazing staff on Chic Recordings and any one of them would have knocked this song out of the park. In fact, it would have been hard to choose. But since it was Kim’s post about the Eagles concert (and her claim about how great he sings it), that brought the song back to my mind…this one had to go to Tony Oxendine. Tony and Royal Records have been a huge support of Chic from the beginning, and I can’t overstate how appreciative I am for that. As we sat in the studio and added Tony’s heartfelt rendition to the music track, I got goosebumps. It is understated, and it is beautiful. Those are the exact same words I would use to describe Henley’s vocal so when we are talking about who sings it better…I say we’ll call it a draw!

Musically, our rendition of “Desperado” is all Eagles. But everyone knows that Linda Ronstadt also recorded an amazing rendition of this beautiful ballad. In fact, Henley credited Ronstadt for popularizing the song with her early cover, and described her version as "poignant, and beautiful." It is no secret that I love Linda Ronstadt and have recorded a number of Ronstadt songs on both Fine Tune and Chic Recordings. Our inaugural release was a Linda song (You’re No Good), and I had searched for another to be our anniversary release. With “Desperado,” while we don’t actually have a Ronstadt song, we do get a little nod to our beginnings. Singing this song myself was, in short, terrifying. With the support of my favorite caller, and Jimmy Mac (who is not just an amazing engineer, but also an amazing vocal coach)…I stepped into the booth and gave it my best. I recorded mine before Tony sang his (thank goodness, because total intimidation would have stepped in). I sent the female track to Tony, so he could hear what we had done with the finished music and harmonies and he sent me the following text. “Absolutely beautiful vocal. I can’t stop listening.” It made me cry.

CHIC 2046 in the female vocal range features my vocal, with backgrounds for both provided by Jimmy Mac, Charlie Robertson, and myself.