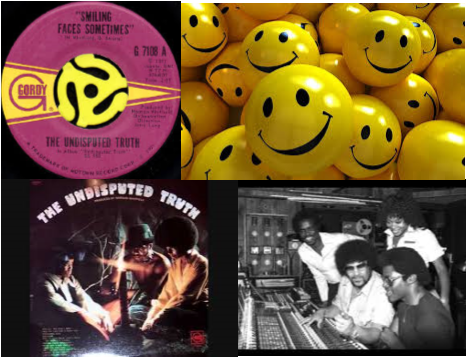 “Smiling Faces Sometimes” was written for the Motown label by Norman Whitfield and Barrett Strong. The Temptations were the first to record it, with an interesting arrangement (12 minutes worth) intended to bring feelings of fear and timidity. A shorter version was planned for a summer of ’71 single release, but was dropped when their lead singer left the group.

Norman Whitfield then re-recorded the song with his brand-new trio, The Undisputed Truth. Whitfield was known for recording dramatically different versions of the same song, which is exactly what he did here. This new version left the “haunted house” sounds behind, in exchange for a more psychedelic/soulful arrangement. The lyrics refer to “back-stabbing” people who will smile to your face while doing you wrong behind your back. It was released in May of 1971, and quickly rose to #3 on the charts. It’s a great song with a killer hook, and let's face it...square dancing could use a little more Motown!

Staff callers Vic Kaaria and Patty Greene were the perfect choice for these vocals, and they both knocked it out of the park. As usual, background vocals supplied by Vic Kaaria, Jimmy Mac, and myself.

CHIC 1045 in the male vocal range features the great vocal from my favorite caller, Vic Kaaria.

CHIC 2045 in the female vocal range features a vocal with just the right attitude from Staff Caller Patty Greene.